A trove of 424 catalogued items, comprising correspondence including letters by Albert Einstein, Thomas Mann, Franz Werfel, and Salman Schocken; Klopstock's manuscripts and personal documents; more than 50 books from his library (among them inscribed copies by Max Brod, Klaus and Thomas Mann, and Franz Werfel), and a large collection of photographs.

When Kafka died in the Austrian lung sanitarium of Kierling in 1924, it was (to employ the phrase used by Klaus Mann) in the arms of his friend Robert Klopstock, an Hungarian-born medical student with literary ambitions whom Kafka had met three years earlier at a different sanitarium, a fellow sufferer from tuberculosis. Klopstock's estate now makes accessible the largely unknown biography of the physician who was forced into emigration in 1938 and became a U.S. citizen in 1945. His manuscripts, his personal documents, his copious collection of photographs, the inscribed books in his library, as well as his correspondence with such eminent figures as Thomas Mann, Franz Werfel, Albert Einstein, Albert Schweitzer, and Salman Schocken now permit us to trace for the first time the path which the life of Kafka's last friend took.

Mann and Einstein both interceded on Klopstock's behalf to help him emigrate and find employment in the United States. In one of these letters, Mann directly invoked Klopstock's role as the selfless care-giver that would come to define his image in Kafka scholarship: "I first met Dr. Klopstock through the gifted young German writer Franz Kafka, for whom Dr. Klopstock did so much professionally and spiritually before he died". From Franz Werfel we have the now-famous 1934 letter in which he describes, in quasi-religious terms, his own relationship to Kafka, in whom he recognized (as he confides to Klopstock) the "Herald of the King".

Indeed, Klopstock himself was well-connected within German and Hungarian literary circles and active as a translator, especially of the humourous stories of Frigyes Karinthy, on which he consulted Kafka. Later increasingly private in his personal affairs and notoriously reticent about his famous companion, the physician was dubbed "crazy Dr. Klopstock" by Max Brod, who appears to have begrudged him his friendship with Kafka, viewing him, perhaps, as something of an interloper. Klopstock held and jealously guarded the Hungarian translation rights to Kafka's works; together with his wife Giselle, Klopstock undertook the first Hungarian translation of Kafka's "Trial", the beginning of which is preserved here. Giselle's own novel "Without Destination", set in a lung sanitarium, won the approval of Thomas Mann, who recommended it to Knopf, his American publisher.

Robert Klopstock died in New York in 1972, a highly respected surgeon and scientist whose research led to significant contributions in the field of pulmonary tuberculosis. His estate forms an extraordinary collection in which important discoveries still remain to be made. A PDF catalogue is available on request. 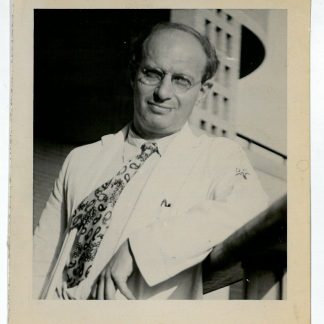