Charming letter to an unidentified recipient, in French, congratulating her on the birth of a child. Paulhan mentions that he heard the news from his close friend Marcel Jouhandeau and alludes to an uncomplicated birth as Marcel "would not even have mentioned it" had it been difficult, as that is the norm and thus less interesting. He develops this thought, extending it to gossip in general and suggesting that we "talk about 'verbiage' and the power of words only when they do not have the slightest power and are not even registered". This is a joke at the expense of Jouhandeau, who apparently had also mentioned or "criticized" his own birth. In closing, Paulhan invites the recipient to visit him at the "Nouvelle Revue Française" so that he can lend her some of Jouhandeau's books, as it is a "shame at her age that she has not read any". 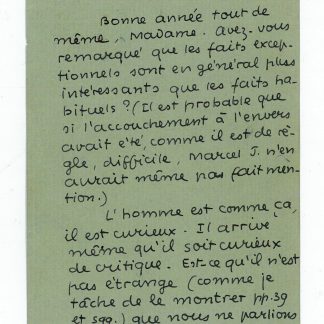