Léopold Flameng's engraving is a reproduction of a photograph of Gérard de Nerval by Félix Nadar from around 1854/55. It appeared posthumously in "L'Artiste", a weekly illustrated review that had published many of Nerval's works.

The older newspaper clipping is Pierre Dax's obituary for Gérard de Nerval's father (L'Artiste, 5 June 1859). The second article is a speculative account of Nerval's "alleged suicide" that was published by "L'Illustration" on 30 January 1932, roughly 77 years after the writer's death.

All with traces of former mounting. 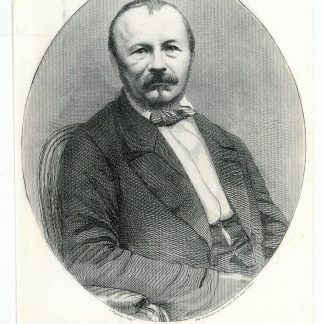