"Your voice has to help me to spur our entire phalanx": Émile de Girardin, Victor Hugo, and the foundation of "La Presse"

The earliest and most important piece of the collection is a letter to Victor Hugo that can be dated to the first half of 1836. After inquiring whether Hugo is still in Paris, Girardin asks him to join a dinner with several supporters ahead of the launch of "La Presse" on 15 June 1836. Girardin stresses the importance of the occasion and of Hugo's role: "Il faut que votre voix m'aide a mettre sur pied toute notre phalange". The supporters mentioned are the poet and author Alphonse de Lamartine (1790-1869), the politician and journalist Jean-Pierre Pagès (1784-1866), and the journalist Adolphe Granier de Cassagnac (1806-80). The first publication of "La Presse" can be described as a pre-launch prospectus, laying down Girardin's journalistic principles and expectations, the scope of "La Presse" and its price. The first article was entitled "Esprit de la rédaction" and opened with a quote by Victor Hugo, connecting the values of the French Revolution with the ongoing struggle for civilizing progress, that was written for the occasion. Quotes by Lamartine and commentaries on the "Present and the future of France" by Hugo and Lamartine were also included. The official launch of "La Presse" as a daily newspaper followed on 1 July 1836 and was an immediate success due to its low price and the collaboration with important authors such as Honoré de Balzac, Alexandre Dumas, Victor Hugo, and Eugène Scribe.

The second dated letter of the collection highlights Émile de Girardin's bitter conflict with the competing newspaper "Le National". This conflict had culminated in a duel between Girardin and Armand Carrel, the co-founder and editor of "Le National", on 21 July 1836, which left both men severely injured. Carrel succumbed to his injuries three days later, and Girardin decided not to agree to any more duels.

Nevertheless, the feud between the two newspapers continued. In a letter to the editor-in-chief of "Le National", dated 23 October 1843, Girardin insists on the publication of his reply to a letter by a magistrate that has been published by "Le National" in connection with a local affair in Bourganeuf (Creuse departement) that personally involved Girardin. The letter had originally been published in 1839 but was republished in reaction to an article in "La Presse" from 11 May 1843, upon the election of the new mayor of Bourganeuf, that alludes to the affair and hostilities towards Girardin. It is this certainly minor affair that incited Girardin's acrimonious letter, which very formally addressed the editor-in-chief Jules Bastide as "Monsieur le Gérant du National".

The second undated letter was written to apologize to a an unnamed recipient for not having been able to meet her. In another letter of apology, dated 14 May 1861, Girardin cancels a promenade with the recipient because of an urgent appointment at the prefecture.

Together with 3 portrait photographs, 1 Woodburytype, and 1 lithograph of Émile de Girardin. The Woodburytype was produced for the "Galerie Contemporaine" by the Parisian studio G. Fontaine and can be dated to ca. 1876.

Well preserved. The letter to Victor Hugo with traces of folds and autograph address; the letter to Lévy somewhat smudged. Collector's notes in pencil (mostly numbering) and traces of former mounting on all pieces. 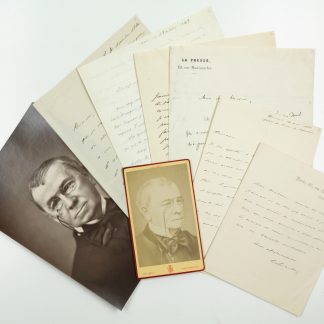