Foolscap folio (ca. 205 x 330 mm). (30) and (31) ff. (rectos only) of duplicate typescript with occasional manuscript corrigenda and addenda. Split-pin fastener in the top left-hand corner of each month.

Unpublished confidential daily field reports from the Sinai and Palestine campaign of the Middle Eastern theatre of World War I, fought by the Arab Revolt and the British Empire against the Ottoman Empire and its Imperial German allies. The reports include the critical period between the Battle of Beersheba in late October and the fall of Jerusalem at the end of 1917.

Usually comprising one leaf for each day of the month, the individual reports commence with an overview of the brigade's activities, followed by further details for each regiment. The account of 9 November, e.g., records the strategically highly important advance on Burayr, one of the first places to be captured by the Allied Forces from the Ottoman Empire, consolidating the British hold on positions controlling the approaches to Jaffa and Jerusalem: "A great day for the Brigade 5th and 7th Regts. moving parallel on left and right respectively and 6th in support were heavily shelled from right flank; but made Bureir and Huleikat without opposition from those places, but had number of casualties from this shell fire. Great quantities of stores waggons and material of all sorts taken 7th Regt took a convoy of about 150 waggons 350 prisoners and many animals most of latter in a wretched condition at Kaukabah. Very many abandoned waggons on the road and stores being looted by Arabs. In afternoon moved on again and 5th Regt supported by one Sqdn of 7th most dashingly rushed another convoy of over 100 wagons and took over 350 prisoners. This convoy subjected to heavy shell fire from enemy on friend and foe alike. Squadron of 7th attached to 5th cleverly took 231 more prisoners in the dark [...]".

The 2nd Light Horse Brigade, a mounted infantry brigade of the Australian Imperial Force consisting of the 5th, 6th and 7th Light Horse Regiments, formed a very distinctive national force within the Egyptian Expeditionary Force, the British and allied army that drove the Ottoman Turks and their German allies back across the Sinai desert in 1916, into Palestine in 1917, and went on to capture Damascus on the first day of October 1918, shortly before the armistice.

Lacks the sheet for the first day of each month; reports of 9 November and 14 December comprising two leaves. Both first leaves (2 November and 2 December) detached, with some marginal loss, as well as slight loss of text to 2 November. Occasional marginal chips and creases throughout, early leaves tanned.

From the Paul Lucas Collection of Australian military history. A unique survival. 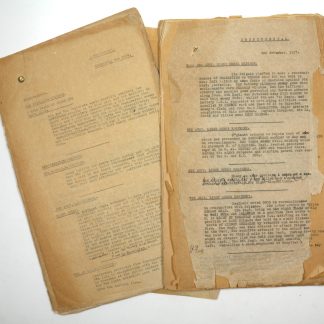