First edition of this two-volume set published by High Highness Prince Mohamed Ali under the auspices of the Royal Agricultural Society, to which the heir presumptive of Egypt and Sudan had presented his manuscript. Mohammed Ali describes the care and breeding of Arab horses as practiced by the Arabs, especially in Egypt, and "gives the reader a picture of the Arabian horse, his treatment and presence in the Middle East" (Boyd/Paul). Reprinted in America in 1975.

Covers show moderate wear and soil; somewhat rubbed and bumped with light corner creasing. A small stain and some partial ink stamps (Brighton and Hove) to the cover of vol. 2. Below the photo of Nimr in vol. I is an inscription reportedly in the hand of the American oil magnate, philanthropist and collector Robert Orville Anderson (1917-2007), founder of the Atlantic Richfield Oil Co.: "Saoud's sire cost me £1750. He was a magnificent Brown Seqlauri Jedran 15.1" (the word "hands" has been added at the end in a different ink). A few additional marginal annotations; altogether a fine copy of a book very hard to find in any edition. 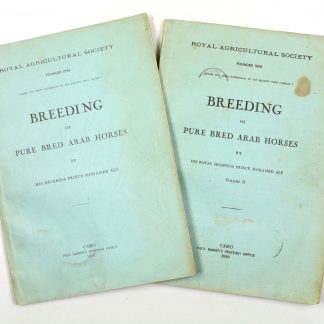