A Rare Provincial Huguenot Psalter, with Music; printed just before their expulsion in 1685

Very rare early, provincial edition of these Huguenot psalms, edited here with music by Valentin Conrart (1603-75), a noted Calvinist. Conrart's fame rests on his position as secretary and founding father of the Académie Française; from 1627 until his death, however, he also served as Councillor to Louis XIV. Tolerance for Huguenots came to a bloody end in 1685, just a few years after the publication of the present work, when Louis repealed the Edict of Nantes and ordered all Protestant churches burned.

Conrart's new translation of the Psalms was spurred primarily by the drastic changes in the French language towards the end of the 16th century, which had rendered Marot and Beza's Reformed Psalter “grotesque and antiquated” (A Dictionary of Hymnology, p. 935). The present Quevilly edition is in a particularly charming format intended for pocket use. Indeed, the introduction contains a handy guide suggesting that the work was intended for private devotion: a3 & a4 give an 'Index' of under what circumstances the reader should sing each Psalm: for the remission of sins (#s 6, 25, 32, 38, 51, 130); if impeded in the practice of his religion (#42); if forced to go to war (#s 17, 20, 80, 83); “si molestée de faux freres” (#94); if taken captive (#s 99, 102, 137); etc etc. A brief 'Principes pour la Musique' is also provided on e1. The musical arrangements of all 150 psalms as well as the Ten Commandments and the 'Song of Solomon' are for one voice.

The timing and geographical distribution of the present work and its editions is quite interesting, and all French editions are necessarily rare. The first appeared in 1677, two years after Conrart's death, and contained only the first 51 psalms. It was printed at Charenton, just south of Paris. In 1679 the full 150 psalms appeared, again at Charenton but also in editions in Paris proper, and in Geneva. The present work was printed at Quevilly (one of just a handful of books from the press of the Widow of Pierre Cailloue!), probably for sale in nearby Rouen. However, in 1681 Louis instituted his policy of dragonnades intended to pressure the Protestant population into conversion or exile, and over the next decades hundreds of thousands of Huguenots fled to Switzerland, England, and the Netherlands. Sure enough, further editions of Conrart's psalms appeared in Amsterdam and Geneva in the late 1680s and 1690s.

An OCLC census of Conrart's hymns reveals just 6 copies of any 17th century edition in US libraries. The 1679 Charenton edition is held at Calvin College (MI); St Mary's Seminary (MD); Princeton Theological Seminary; Assumption College (MA); and Yale, while a 1679 Paris edition is held at U Kansas.

John Julian, A Dictionary of Hymnology, pp. 935-936; this edition unrecorded in OCLC. 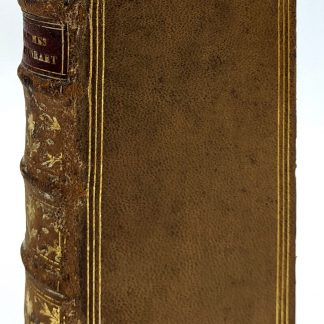