A Provincial Italian Critique of Rousseau

Very rare first edition of the first Italian translation of Mme de Staël’s passionate adulation of Rousseau and his works. Rousseau faced strong opposition from the conservative establishment in Italy, alongside other authors of the French enlightenment; his works were immediately placed on the Index, and with a few exceptions he was not widely translated in that country until the 19th century. This is only the second of Mme de Staël’s works to appear in Italian, according to Dejob’s bibliography.

Mme Necker, Staël’s mother, had deliberately sought to raise her daughter according to the Rousseauan principles outlined in Emile. At the tender age of 22 Germaine de Staël brought out her "Letters on the Works and Character of J. J. Rousseau" (1788). Its translation here is prefaced by a lengthy “discorso del Traduttore sullo stesso argomento”, in which Tamassia delivers his own opinions on Rousseau, whom he calls a modern-day ‘Prometheus’. As Dejob notes, “The translator, C.-G. Tamassia, judges certain opinions of Mme de Stael to be rather liberal; but he comments on her with enthusiasm in the preface…” (Madame de Staël et l'Italie, pp. 203f., trans.). The curious choice of Mendrisio for the place of printing was likely made out of respect for Rousseau’s controversial status in Italy: Mendrisio is in Switzerland, but lies just a few miles from the Italian border.

COPAC shows no copies in UK libraries; OCLC shows just one copy in US libraries, at Chicago. 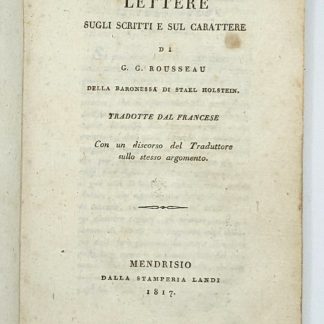