Very rare 17th-century edition of this popular Early Modern tale of a quack doctor, Grillo, who swindles his way to the top of the medical profession. First printed in 1518, the story circulated in vernacular, chapbook form for two centuries, but all surviving editions are extremely rare in census: the present edition is held at Harvard and Oxford only, according to OCLC. The title here can be rendered as ‘New Story, enjoyable and amusing, of a Villainous Farmer named Grillo, who wanted to become a Physician…’.

The peasant Grillo one day assumes the airs of a doctor and finds himself called to court to save the king’s daughter from a fishbone lodged in her throat. He effects a miraculous cure simply by making her laugh, which earns him the admiration of the king. Soon, he is adopted whole-heartedly by the nobility as ‘Maestro Grillo’ and “becomes so popular that the other doctors starve, and finally ask the king to kill him. The king refuses, but sets him a difficult task to do, namely, to cure all the patients in the hospital; failing to accomplish this, he is to be killed or dismissed. Doctor [Grillo] has a huge cauldron of water heated, and then goes into the ward and tells the patients that when the water is hot they are all to be put into it, but if any one wishes to depart he can go away then. Of course they all run away in haste, and when the king comes the hospital is empty. The doctor is then richly rewarded, and returns to his home” (Crane, Italian Popular Tales, p. 383). 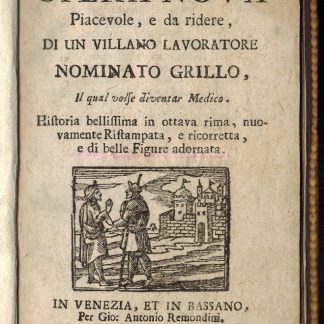