Female Treachery Unmasked: A Handbook of Misogyny for the Napoleonic Era

Extremely rare first edition, known in just four institutional copies worldwide, of this broad-sided anonymous attack on the female sex printed during the Napoleonic era. Leaf A2 contains a few verses by a ‘jeune Dame’ who complains that the author is merely a lovelorn victim taking out his frustration on ‘ce Sexe enchanteur / Qui rendit l’homme animal sociable”, perhaps indicating the tongue-in-cheek nature of the entire enterprise. Nevertheless, the chapter headings (“To the Defenders of the Female Sex”; “On Girls and their Tricks”; “On Beauties”; “On Ugly Women”; “On Flirtatious Women”; “On Intelligent Women”; “On Prostitutes”) certainly set a vituperative tone.

The printer-publisher Tiger was active between 1786 and 1825. During a police inquest, according to Gay (p. 288), it was reported that “his shop was the depot used by colporteurs to inundate the boulevards and countryside with illicit novels and historiettes, to which he added engravings”, for which Tiger was consequently “suitable for surveillance”.

Much of the text describes the author’s encounter - after having his heart broken at the age of 18 - with a wizened old man named Aristée who instructs him in all of the evil ways of women. His main thrust seems to be that one should not hate women or shame them, as they are essential for the procreation of the human race, but one must be aware of all of their guiles and ‘ruses’ with which they “fool us and seduce us”, as well as their natural tendencies towards infidelity. The final lessons of Aristée for young Adolphe concern marriage and how to manage “The Newly-Married Woman”; “The Jealous Woman”; “The Proud Woman”; “The Vain Woman”; “The Lazy Woman”; finally p. 107 contains a “Warning to all Husbands” about wives who press their husbands for ‘conjugal duties’.

Gay gives the imprint as ‘Didot, chez Tiger’, with a date of 1812 but no collation; our example may represent an earlier state. Martin, Mylne, and Frautschi include it in their Bibliographie du Genre romanesque français, 1751-1800, although also suggesting the date of 1812 perhaps following Gay. COPAC shows just four copies worldwide, at the BnF, the BL, Indiana, and Texas A & M; the Catalogue Collectif de France astonishingly adds no further copies. 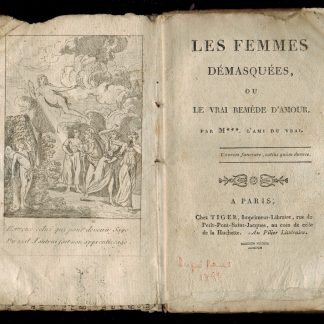