Scarce second edition - illustrated with a set of eight evocative hand-coloured chromolithographs - of this original German account of two icons of the American West: Daniel Boone (1734-1820) and the Shawnee chief Tecumseh (1768-1813). Although well-researched and running to an exhaustive 540 pages, the work was aimed at children (according to the title-page), for whom the often violent illustrations probably afforded a welcome distraction. Predating the more famous efforts of Karl May in the 1880s, German children’s literature celebrating the Wild West seems to have initially coincided with heavy emigration from that country to the Ohio Valley etc. during the mid-to late-nineteenth century.

Kottenkamp’s 12-page preface gives a brief history of the early pioneers of the American West including Boone, along with English-language sources and suggested reading material. The section on Boone covers his life from 1769, when he first began to explore Kentucky and encountered Shawnee resistance, until his death in 1820. Pages 373-540 in turn treat the life of “the Indian Chieftain and Prophet Tecumseh and his Brothers” during the period 1805-14, when Tecumseh’s chief adversary William Henry Harrison was serving as Governor of Indiana Territory. At least judging by the illustrations, the narrative certainly depicts the European American settlers as a violent people: the frontispiece for example depicts a hatchet-wielding Native American being clubbed with a rifle butt by a wigged American soldier; but other illustrations show a calmer, more civilized view of Native American life.

The first edition of 1855 contained just one, uncoloured illustration; OCLC shows US copies at Illinois, Detroit Public Library, Missouri, Duke, and the Huntington. The present second edition is recorded at the NYPL, Arkansas State, Kentucky, Michigan, as well as the Cincinnati Public Library, NY Historical Society, Western Reserve Historical Society, and Wisconsin Historical Society. However, we note that the only digitized copy we have traced, at the Augsburg State Library, is woefully incomplete (lacking the frontispiece, title-page, and all 12 pp. of prelims); we suspect that other institutional copies may have fared similarly, if uncatalogued as such. 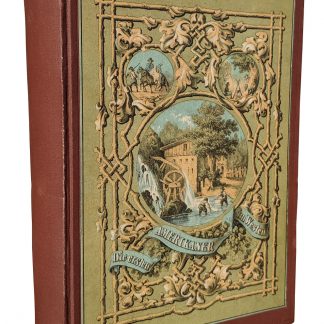