The Execution of a Black Cuban Bandolero: The Second Recorded Copy

4to (215 x 158 mm). (4) pp., consisting of a single bifolium. Crude wood-engraved illustration on A1 depicting a Black man (Benito Castro) on the scaffolding attended by an executioner and a priest.

Extremely rare sole edition of this fanciful vernacular account in Spanish verse of a black Cuban cimarrón-turned-highway robber. Unlike the rest of the Spanish empire, Cuba continued to import fresh slaves until 1867 and did not fully abolish the practice until 1886; the term simarron [cimarrón] was used to denote a runaway slave who supported himself by banditry.

Printed in the city of Reus, near Tarragona on the Catalonian coast, the present work invites the reader contemplate the “Causa horror y espanto / el oír las crueldades, / robos, muertes y maldades / que hizo Benito Castro” in 22 stanzas of 10 rhythmic lines each (decimos). No detail is given of Castro’s experience of slavery, but instead the congenitally evil nature of this “infernal esclavo” is stressed; the lengthy descriptions of his weaponry, his bloodthirsty conduct, and his lack of compunction were evidently intended to strike revulsion and fear into the hearts of Borrull’s readers: “¡Qué depravada maldad hizo allí con tiranía esa fiera que abomina y al mundo hace temblar!”.

The presumably fictional Castro is responsible for no fewer than 23 murders, of which several are recounted here. In one instance he ambushed a carriage, stabbing the merchant and his wife in the heart and not even sparing the coachman; in another he killed five mule-drivers for money; and even murdered a priest on one occasion for his money. One day, Castro returned to his former master’s home to slaughter him and his wife. This appears to have been the final straw, and a mob of angry townsfolk and soldiers hunt him down and finally catch him. But here the text adopts a slightly different tone; rather than executing Castro on the spot, he is brought before a magistrate, and endures a 3-day trial in order to force him to confess his sins. Finally, after being confined in a chapel and visited by a priest, he relents and begs for divine mercy. Strangely, by the end of the poem the tone has become quite sorrowful: on the morning of his death, the crowd gathered to witness the execution tries to bribe the hangman to ‘make it quick’ rather than prolong Castro’s suffering; and after his death he is buried by the townsfolk in a black coffin with due solemnity.

We have been able to locate just one other copy worldwide, at the Biblioteca de Catalunya. 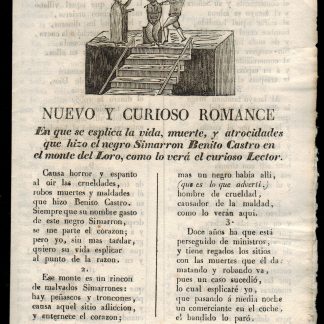