8vo. 127, (1) pp. Printed in Ottoman Turkish type with a few words printed in roman type. With the portrait of Darwin. Later brown cloth with gilt title "Darvinizm" to spine and "Kiliçoglu" giltstamped on the upper board. Pink pastedowns and endpapers.

Rare first work on Darwinism printed in Istanbul and the second work on this topic in the Ottoman Turkish language. This is a translation of the work "Wahrheit and Irrthum im Darwinismus" ("Truth and Error in Darwinism") by the German philosopher Eduard Hartmann (1842-1906), an examination of Darwinism which was first published in Berlin in 1875. It is here translated from Georges Guérolt's French version by the scholar Memduh Süleyman, who also added a commentary and critical apparatus.

The work was published at the height of the Ottoman debate on Darwin's evolutionary theories. The last two decades of the 19th century had seen a rising interest in evolution among Ottoman Turkish intellectuals. Münif Pasha, who also served as minister of education, had been the first to discuss in Turkish, in 1863, Darwin's theory of evolution in his scientifc journal "Mecmua-i Fünun". According to him, Islam and science (and therefore the idea of evolution as proposed by Darwin) were not in conflict and should not affect each other. In his commentary Süleyman objects to this idea, reflecting the larger early 20th century Islamic opinion on Darwinism. He particularly disagrees with the notion of survival of the fittest by means of natural selection, which he considers "the biggest mistake of Darwinism" and incompatible with the theological precepts of Islam.

It would be five more years until any part of Darwin's "On the Origin of Species" would be translated into Arabic (the first six chapters were published in Cairo in 1918). Nevertheless, this Turkish commentary on Darwinism can be considered an important agent of change, commenting on the Darwinian idea of evolution at a time when the Ottoman debate on the subject was flourishing.

Cloth on the upper board a little bit rubbed, leaves somewhat browned (especially near the end ), title-page and last page a little damaged on the inner margin (affecting a letter of the title), otherwise in good condition. Very rare; only two copies traced in library catalogues internationally (Library of Congress; Leiden University Library). 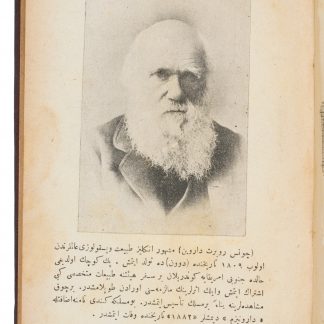