Two fine British Admiralty Hydrographic Charts for the Gulf region, covering the entire north-eastern coastline of the Arabian Peninsula. The set comprises the comprehensive map of the entire Arabian Gulf (2858), covering the area from Basra to Ras al-Hadd, as well as the map of Trucial Oman (3705) encompassing plans of Umm Al Qaywayn, Dubai and Abu Dhabi.

First issued in 1955 and 1965 respectively, the present charts are enhanced editions from the early 1970s. The practice was to print an initial edition based on a major hydrographic survey, and then to overprint them with subsequent data as it became available. 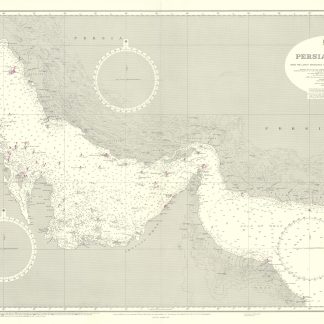