Inscribed "from the author"

Weston, Stephen. Remains of Arabic in the Spanish and Portuguese Languages. With a Sketch by Way of Introduction of the History of Spain, From the Invasion to the Expulsion of the Moors [...].

Only edition: an early study of the substantial traces which Arabic and other oriental languages left on the Spanish and Portuguese lexicon: Includes two copious word lists. The English antiquarian, clergyman and linguist Stephen Weston (1747-1830) also produced, in 1802, the earliest English translation of the Greek text of the Rosetta Stone.

Inscribed "From the Author" on the half-title. Spine faded. Removed from the Jews' College, London (a rabbinical seminary now known as the London School of Jewish Studies), with remains of a spine label and their several cancelled stamps. 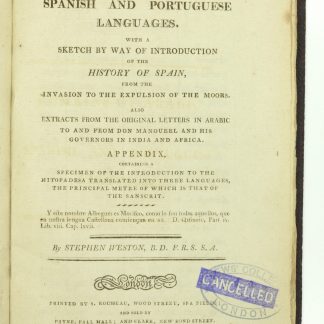 Sie sehen: Weston, Stephen. Remains of Arabic in the Spanish and Portuguese Languages. With a Sketch …London, 1810. € 1.800,00
In den Warenkorb