Unrecorded guide for British employees of the Kuwait Oil Company, just before the commencement of drilling in 1952, with highly detailed information on Al Ahmadi

Small folio (205 x 330 mm). (2), 22 pp. Printed on the rectos only in purple ink, probably by a spirit duplicator. Loose sheets, stapled at the left top corner and hole-punched in the left margin.

Unrecorded information manual for employees of the Kuwait Oil Company (KOC) who would be residenced at Al Ahmadi, headquarters of the Kuwait Oil Company. Founded in 1934, the KOC was a joint venture between the British Anglo-Persian Oil Company and the American-based Gulf Oil. In the same year, concession rights were granted for 75 years to the KOC by the Sheikh of Kuwait, Ahmad Al-Jaber Al-Sabah (ruled 1921-1950). Oil was first discovered in 1938 at Burgan field, followed by discoveries in Magwa in 1951 and Al Ahmadi in 1952. The first commercial shipment took place in 1946. As the initial development of the KOC coincided with the end of the British Raj in India, many British and Indian workers were transferred to Kuwait, in particular to Al Ahmadi, which was set up to house them.

As the foreword states, this small booklet is "intended as a guide for new staff arriving in Kuwait". Published in Ahmadi in 1952, immediately after discovery of oil and the beginning of drilling operations, it provided principal information especially to the new British employees, as it contains information on airmail posting times to the UK. It further discusses procedures at arrival, accommodation (bachelor camps, arrangements for women, floating staff), the Kuwaiti, sea baggage, shopping facilities, illnesses, church services, cash offices, political agencies, ordering newspapers and periodicals, transport, meal times, alcohol, on "His Highness the Ruler", insurance, on dogs and the veterinary surgeon, fire precautions, furniture rental, etc. Clubs and societies for the employees' spare time are also extensively discussed, such as the Hubara Club, Cumberland Yacht Club, Ahmadi Riding Club, Johnnie Patrick Club, as well as sports clubs and the cinemas. With an extensive index at the beginning and a "list of essential telephone numbers" at the end, including the numbers of the dentist, fire station, and police.

This unrecorded guide is very rare: a cheaply produced ephemeral document that was issued only in small numbers for in-house circulation.

Only very slightly frayed in places, with creases along the edges and corners; staple a little rusted; leaves slightly toned; some leaves trimmed a little short with insignificant loss, but overall in remarkably good condition. 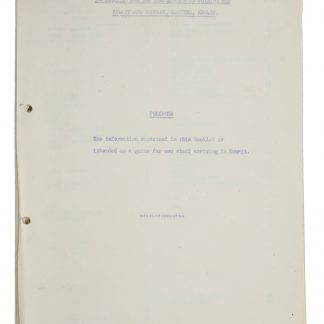