Studying in Paris and Munich, Corinth joined the Berlin Secession in 1892, later succeeding Max Liebermann as the group's president, and realized a synthesis of Impressionism and Expressionism in his work, his style taking on expressionistic qualities after he suffered a stroke in 1911.

Small ink stain on verso showing through near lower right corner; some small ink spots. Self-addressed by the collector on the reverse. The Mecklenburg physician Scharlau (b. 1888) assembled a collection of artists' autographs by personal application. 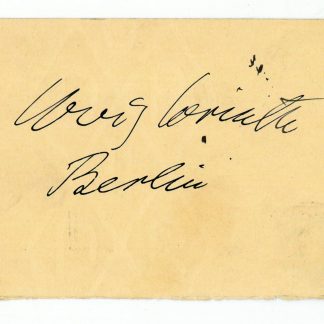