Appointed as a teacher at the Weimar Kunstgewerbeschule in 1910, Dorfner went on to teach at the Weimar Bauhaus after WWI before establishing a school for bookbinding in his private home in 1922. His most prominent works included bindings for the Weimar publishing house "Cranach-Presse", the 143-volume Weimar edition of Goethe's works published from 1887 to 1919, and several editions of "Faust".

Traces of a postage stamp. Self-addressed by the collector on the reverse. The Mecklenburg physician Scharlau (b. 1888) assembled a collection of artists' autographs by personal application. 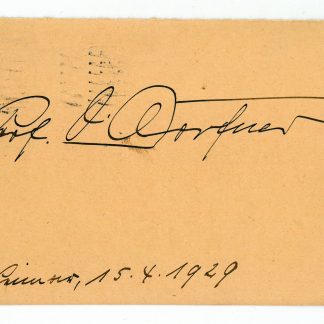