Best known for the typesets he created from 1907, including "Ehmcke-Antiqua" and "Ehmcke-Kursiv" (adopted for English-language typesetting under the name "Carlton"), Ehmcke was the concept designer of the 1912 Sonderbund exhibition, worked with several publishing houses, and operated his own printing company, the "Rupprecht Presse" in Munich, between 1913 and 1943.

Small tear in upper margin; a few small ink spots. Self-addressed by the collector on the reverse. The Mecklenburg physician Scharlau (b. 1888) assembled a collection of artists' autographs by personal application. 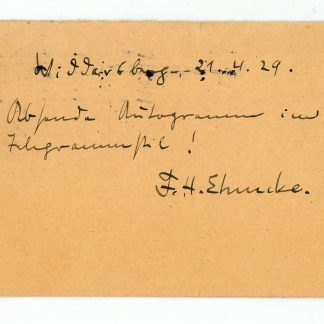