Befriending the artist Max Klinger during his first study trip to Italy in 1891, Greiner moved from Munich to Rome in 1892, where he worked in Klinger's former studio and created several monumental paintings, including "Odysseus und die Sirenen", "Hexenschule", and the cycle "Über die Frauen". Nudes constitute a recurring theme in his work.

Traces of a slightly oblique fold near right margin; traces of postmarks. Self-addressed by the collector on the reverse. The Mecklenburg physician Scharlau (b. 1888) assembled a collection of artists' autographs by personal application. 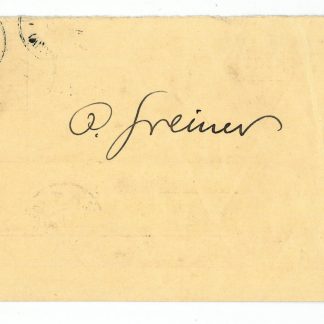