After working for several Norwegian magazines, Gulbransson moved to Munich in 1902 and became a leading artist for the satirical magazine "Simplicissimus". He created illustrations for childrens' books including "Es war einmal" in 1934, and produced caricatures against the Allies, in particular against Winston Churchill, during the Second World War.

Small ink spots near upper left corner. Self-addressed by the collector on the reverse. The Mecklenburg physician Scharlau (b. 1888) assembled a collection of artists' autographs by personal application. 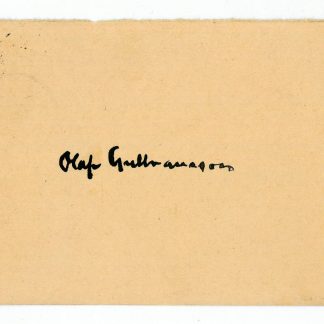