Awarded the Rome Prize of the Prussian Academy of Arts in 1890, Haverkamp spent two years in Italy where he created several of his most popular works, including "Knabengruppe" and "Bocksprung", before returning to Berlin, where he won several awards in the following years and became a teacher at the Kunstgewerbemuseum in 1901.

Small ink spots and creases; postmark on verso showing through. Self-addressed by the collector on the reverse. The Mecklenburg physician Scharlau (b. 1888) assembled a collection of artists' autographs by personal application. 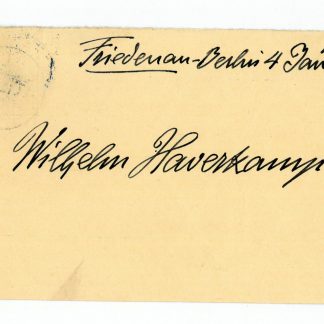