Studying in New York and Munich, Kleehaas applied himself to genre painting and portraiture, and is considered a prominent representative of traditional Munich genre painting around 1880. The impressionist works he studied during his trips to Italy, France and Belgium only slightly influenced his style.

Postmark of the railway post; some traces of glue; tiny creases near lower corners. Self-addressed by the collector on the reverse. The Mecklenburg physician Scharlau (b. 1888) assembled a collection of artists' autographs by personal application. 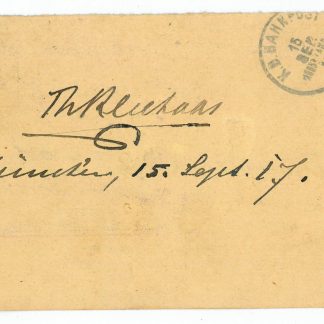