Kühnelt became a member of the Vienna Künstlerhaus in 1912. He created funerary monuments and designs for the decoration of the main facade of the Künstlerhaus and frequently exhibited at the Vienna Secession and Künstlerhaus. Kühnelt was killed on the Russian front in 1914, only three months after signing this leaf - one of the earliest casualties of the First World War.

Some ink spots and small creases. Self-addressed by the collector on the reverse. The Mecklenburg physician Scharlau (b. 1888) assembled a collection of artists' autographs by personal application. 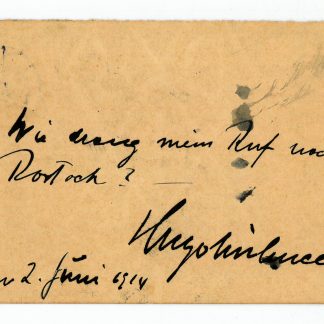