Inscribed to Cora Scharlau, a relative of the German dermatologist Alwin Scharlau.

A prominent representative of Historicism, Lessing largely shaped the appearance of Berlin in the late 19th and early 20th centuries, creating sculptures and decorative architectural elements for the facades and interiors of many important buildings, including the Reichstag and Berlin Cathedral. He was appointed to the Senate of the Prussian Academy of Arts in 1911.

Some smudged ink stains. Self-addressed by the collector Cora Scharlau on the reverse. The Mecklenburg physician Alwin Scharlau (b. 1888) assembled a collection of artists' autographs by personal application. 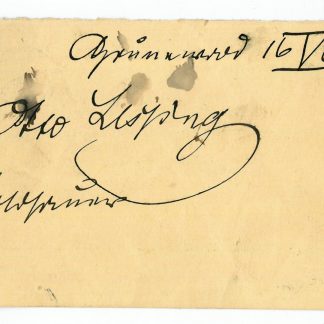