After studying at the Berlin Academy and receiving further training in London, Manthe settled in Berlin, where he remained for the rest of his life. His work comprises sculpture groups, portrait busts, war memorials and tombs in Berlin, Schwerin, Angermünde and other German cities.

Traces of a postmark. Self-addressed by the collector on the reverse. The Mecklenburg physician Scharlau (b. 1888) assembled a collection of artists' autographs by personal application. 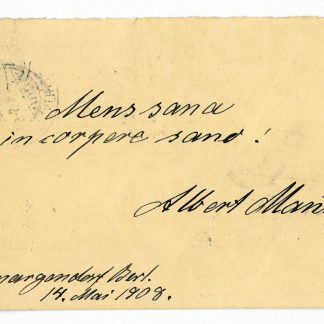