Considered the founder of impressionist painting, Monet aimed at documenting the French countryside, which led to a method of painting the same scene many times so as to capture the changing of light and passing of the seasons. His series of haystacks (1890-91), paintings of the Rouen Cathedral (1894) and of the water-lily pond at his home in Giverny constitute some of his best-known works.

Small creases near cornes; a few faint ink spots. Self-addressed by the collector on the reverse. The Mecklenburg physician Scharlau (b. 1888) assembled a collection of artists' autographs by personal application. 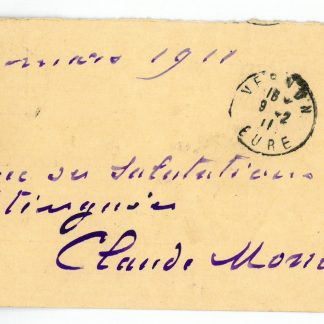