After spending some time studying in Rome, Schmitt settled in Munich in the 1880s, where he operated a studio with his colleague Thomas Buscher (1860-1937) and received numerous commissions, mainly for sacred art as well as for fountains, funerary monuments and war memorials.

Several small ink spots; postmark on verso slightly showing through. Self-addressed by the collector on the reverse. The Mecklenburg physician Scharlau (b. 1888) assembled a collection of artists' autographs by personal application. 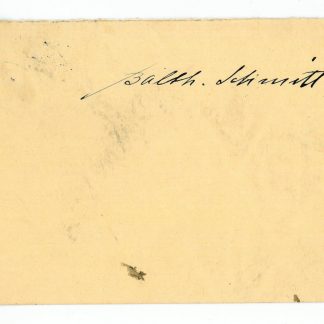