After studying and working in Berlin and Vienna, Tuaillon lived in Rome from 1885 to 1903, where he created his main work, "Mounted Amazon", which was celebrated at the "Große Berliner Kunstausstellung" in 1895, resulting in a commission from German Emperor Wilhelm II for a larger-than-life version of the sculpture, which was set up before the Berlin National Gallery in 1898.

Some small ink spots; traces of a vertical fold; traces of an angular fold near upper right corner. Self-addressed by the collector on the reverse. The Mecklenburg physician Scharlau (b. 1888) assembled a collection of artists' autographs by personal application. 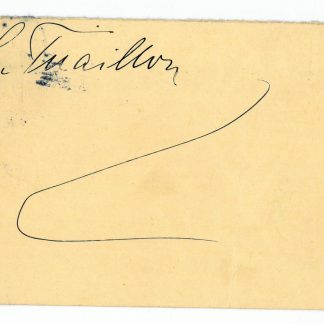