Studying and working as a stone cutter in Wiedenbrück from 1870, Uphues was admitted to the Berlin Academy in 1878 and became a freelance sculptor in 1892. His oeuvre includes two sculpture groups for the Berlin Siegesalle as well as the 1886 bronze sculpture "Verteidigung einer Sabinerin" in Düren City Park.

Traces of a postmark; some small ink spots. Self-addressed by the collector on the reverse. The Mecklenburg physician Scharlau (b. 1888) assembled a collection of artists' autographs by personal application. 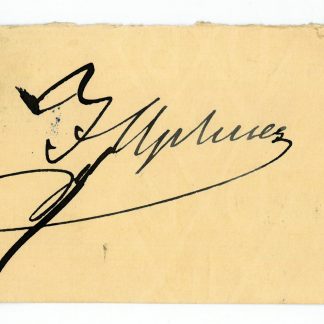