Best known for his history paintings of notable political and military events in Prussia, von Werner is regarded as a chief representative of the Wilhelmine Period. His most important works include "The Capitulation of Sedan", "Proclamation of the German Empire at Versailles", and "The Meeting of Bismarck and Napoleon III".

Traces of postmarks. Self-addressed by the collector on the reverse. The Mecklenburg physician Scharlau (b. 1888) assembled a collection of artists' autographs by personal application. 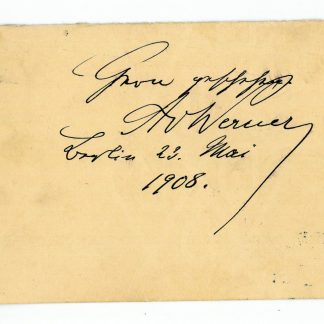