A prominent landscape painter of the Düsseldorf School, von Wille advanced to an expert in depicting the Eifel region, where he spent the summer months from 1885 onwards. He lived in Kerpen castle from 1911 and was deemed the principal painter of the region even in his lifetime, his works improving the reputation of the Eifel and showing off some of its characteristic geological features.

Traces of a horizontal fold; left margin a little worn. Self-addressed by the collector on the reverse. The Mecklenburg physician Scharlau (b. 1888) assembled a collection of artists' autographs by personal application. 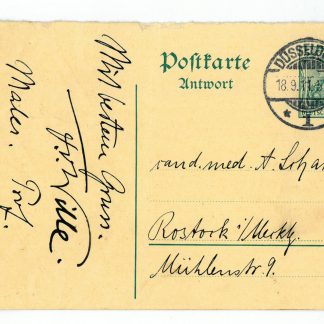