Like his elder brother Josef, Ludwig Willroider was a popular landscape painter. His preferred subjects included Lake Starnberg, the Isar valley and his native Carinthia, as well as Southern Tyrol and Upper Italy. He regularly exhibited his works at the Munich Glaspalast and became an honorary member of the Munich Academy in 1883.

Traces of postal stamps; traces of a small fold near lower right corner. Self-addressed by the collector on the reverse. The Mecklenburg physician Scharlau (b. 1888) assembled a collection of artists' autographs by personal application. 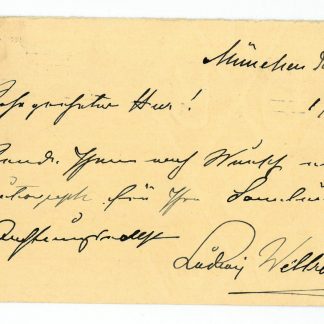