From the celebrated library of Dr. Odorico Pillone

Frankfurt am Main, (Georg Rab the Elder for) Sigmund Feyerabend, 1580.

First edition of this collection of the leading histories of the Low Countries, edited by Feyerabend. Fore-edge painting by Cesare Vecellio, depicting a scholar seated at a desk overlooking a landscape with the title "ANNA/LES" below; top and tail edges decorated with abstract line designs.

A rare item from the celebrated library of Dr. Odorico Pillone and his father. Late in the 16th century, Odorico invited Vecellio (first cousin once removed of the master painter Titian, under whom he trained) to decorate a number of books in his library with fore-edge paintings, thereby establishing the earliest known private collection of such paintings. As was Vecellio's preferred style, the painting here is of a scholar, brightly dressed in red and a black hat, centered on the fore-edge and additionally visible on the closed edge.

Corners insignificantly bumped and rubbed, some worming to edges and spine, hinges and endpapers (with chipping to head of spine). Binding shows some dampstaining and soiling. A few tears to flyleaves. Internally generally clean with occasional insignificant foxing and some dampstaining, chiefly confined to margins, as well as minor text block edgewear. Overall a very good example with the fore-edge painting a little worn but still bright. 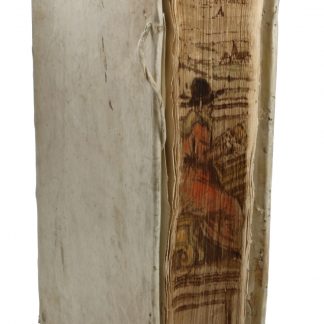