The Arabs of the marshes in southern Iraq: with 110 photographs

8vo. (14), 242 pp. With a frontispiece, 3 maps in text (including 1 double-page) and 32 plates with reproductions of 109 photographs. Green cloth with illustrated dust jacket.

First edition, second impression, of an account of the Arabs living in the marshes of southern Iraq, written by Wilfred Thesiger (1910-2003), who stayed with them from 1951 to 1958. "From my recollections, helped by my diaries, I have tried to give a picture of the marshes and of the people who live there. Recent political upheavals in Iraq have closed this area to visitors. Soon the marshes will probably be drained; when this happens, a way of life that has lasted for thousands of years will disappear" (Introduction). In 25 chapters Thesiger describes his experience in the marshes. The book is illustrated with over 100 photographs showing the people, their homes, boats, horses and kettle, and some common activities like fishing, preparing food and making homes and buildings out of water reed. Thesiger also wrote "Arabian Sands", published in 1959.

In very good condition. Dust-jacket only slightly worn at head and foot of the spine.

For the author see: A. Maitland, Wilfred Thesiger: The Life of the Great Explorer (2011). 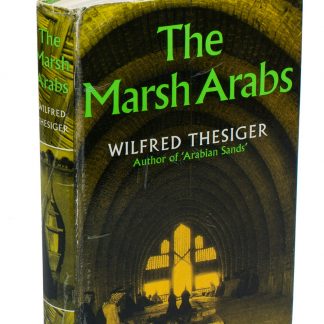