The rare first edition of Kelsen's "Pure Theory of Law", very probably the most influential theory of law produced during the 20th century, published when the author was 52 years old. In 1940 Kelsen, who had also drafted the 1920 Austrian Constitution, was forced to emigrate to the USA, where he taught at the University of California, Berkeley. Late in his career, and officially retired, he revised his fairly short magnum opus into a greatly enlarged second edition, published in 1960 by the original Viennese publisher, Deuticke. A copy of the second edition is included with this offering.

Very light brownstains to margins of first and last leaves of the first edition. A few mended tears and a few edge chips and flaws to the dust jacket of the second edition. Provenance: from the collection of the Austrian lawyer Heinz H. Löber (b. 1940), who enjoyed a Fulbright scholarship at the New York University School of Law from 1963 to 1964, with his ownership stamp to the flyleaf of the later work. 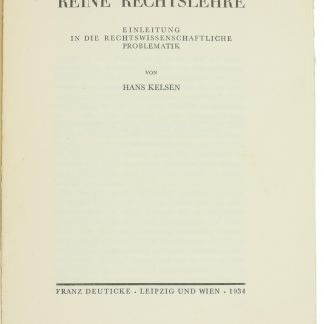