Curious letter addressed to the Chancellor of Austria, probably Rudolf Ramek, expressing his joy over a "new link" forged between the Republic of Austria and the French Republic by "the invention of Mr Belin".

Édouard Belin (1876-1933), who had studied photography at the Academy of Fine Arts in Vienna, is today best known as the inventor of the Bélinograph, an ancestor of the fax machine. Painlevé's message either refers to the Bélinograph or to Belin's brand of teleprinters that had been successfully established in 1925, although Belin was not the inventor of this technology. It is very likely that the letter was written during Painlevé's brief second term as Prime Minister of the French Republic (17 April - 22 November 1925). His Austrian homologue at the time was the conservative politician Rudolf Ramek. 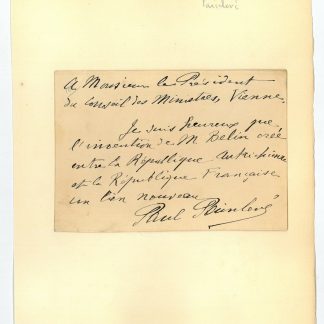