A prayer book of a Dargah for Lailat al-Miraj

A manual of prayers ('wird') for recital at Lailat al-Mi'raj ("Miraç Kandili" in the Turkish tradition), the night celebrating Muhammad's Ascension to Allah and one of the most important Muslim holidays.

The present manuscript was prepared for the use of the Sheikh of the Dargah (shrine) of Besikçizade, located on the historical peninsula in Istanbul. In the text, the source of these prayers is given as a religious scholar named Ahmad bin Abu al-Hasan Ali al-Makki al-Husayni, a descendant of the Prophet Muhammad.

The text begins with the Basmalah set within ornate, gilt borders, and the Prophet and religious leaders are commemorated. Directions written in red ink to repeat certain sections "three times" reveal that the manuscript was prepared to aid the Sufi tradition of "dhikr", the repeated meditative chanting of phrases or prayers. Principal Qur'an suras (Al-Ikhlas, Al-Falaq, Al-Nas, Al-Fatiha, Al-Hashr, Ayat Al-Kursi, and Al-Baqara) are to be recited, and the names of Allah are enumerated, with additional prayers to prophets, caliphs and religious leaders.

While the prayers are generally in Arabic, the book further contains a leaf and several marginal notes in Ottoman Turkish whose anonymous author is probably a Turk from Istanbul. He states that he participated in this Sufi ritual on the "Night of Miraç" and that his guide on that night was a person named Necib Effendi. Interestingly, the proper names and exact dates have been deliberately erased from these annotations, possibly by a near-contemporary owner. Arabic and Turkish parts are closely interwoven, and although the manuscript is not apparently bound out of order, a few pages appear to have been removed before binding. Some ink smudging and offsetting; a single edge tear; variously dampstained. Still an attractive survival of a rare Ottoman Sufi liturgical manuscript. 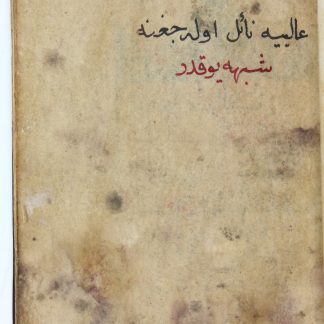