Together with a typed letter signed by Mrs Thatcher's secretary Nicola Halton presenting the photograph to Leslie O'Neil, dated 1978, and a group of 7 typed letters signed to Leslie O'Neil from various secretaries of Mrs Thatcher (including Tessa Gaisman, Janice Richards, Caroline Ryder (née Stephens) and others, 1978-86, one on Conservative Party stationery, the rest on 10 Downing Street stationery, most retaining envelopes.

Provenance: the recipient Leslie O'Neil appears to have been a sometime employee of Aramco in Dhahran, Saudi Arabia (a few of the letters are addressed to him there, the rest to addresses in Manchester). 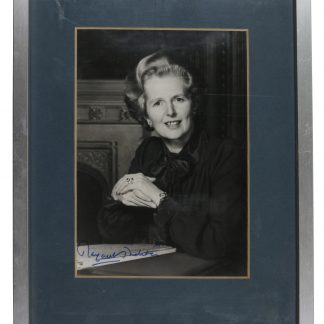