12mo. 2 pp. on bifolium. With autograph address and traces of seal.

Born in Cagliari to a family of the Savoyard-Sardinian high nobility, Giovanni Matteo de Candia was supposed to follow his father's footsteps in the military. While serving as a second-lieutenant in the King of Sardinia's Guards in Turin, he fell into debt. When his father refused to pay for his son, de Candia was expelled from the army in 1834. He travelled to Paris and began to study with Giovanni Marco Bordogni at the Paris Conservatory. The young tenor made his debut in November 1838 as the hero of Meyerbeer's "Robert le Diable". He was immediately successful, signed his contract simply "Mario", and was popularly known thereafter by that name. In 1839 Mario made a triumphant debut in London as Gennaro in Gaetano Donizetti's "Lucrezia Borgia" opposite Giulia Grisi, the famous Italian soprano who became his life-long companion. He made his Paris debut at the Théâtre-Italien as Nemorino in Donizetti's "L'elisir d'amore". For the next 30 years he was a principal singer of romantic parts in Paris and London, also appearing in St. Petersburg, New York, and Madrid.

With traces of former mounting and some browning. 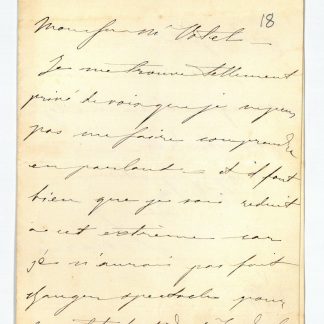