First edition. Part I of the well-known five-part handbook series prepared by the Arabian American Oil Company for the benefit of their staff as operations began to expand after WWII. Intended "for the purpose of simplifying and facilitating the spreading among Aramco's American employees of general information", the booklets were "designed to give [...] information about the Aramco enterprise itself and about Arabia and the Arabs which will help employees understand the reason behind Aramco policies and objectives" (p. II f.). Although intended for the instruction of Aramco's own employees, the series "attracted widespread interest outside the company and the demand of copies was so great that two years later, in January 1952, a revised hardbound edition was published" (Nawwab). This revised second edition combined the five original booklets into two volumes. Subsequent editions in a single volume appeared in 1960 and 1968.

The present part I discusses the history of oil production and the role of the United States, in particular the evolution of Aramco oil exploration in Saudi Arabia, emphasizing the company's pioneering role in the country: "Aramco has had to set its own pattern, and as the only oil development company in Saudi Arabia has had a unique role in the development of the country" (p. I). Apart from refineries, tanks, drilling operations, oil wells, the city of Jeddah, the Dammam oilfield, Dhahran Camp, the Ras Tanura refinery, and the construction of pipelines in the desert, the photographs include pictures of royal visits to Aramco operations, showing King Ibn Saud and Crown Prince Saud in Dhahran in 1947, as well as the Sheikh of Bahrein in 1939. Further, the illustrations comprise charts showing the changes in U.S. consumer demand between 1908 and 1948 and U.S. production increase from 1859, as well as maps of the American interest in the Middle East and a world map displaying oil reserves and the inter-regional movements of petroleum in 1948. 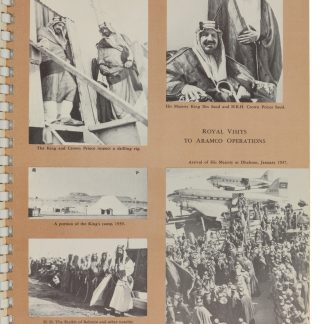