The climate of the Gulf

[Arabian Gulf]. Weather in the Indian Ocean to Latitude 30° S. and Longitude 95° E. Including the Red Sea and Persian Gulf. Volume II. Local information. Part 9 Coast of East Africa from the equator to Cape Delgado [...].

4to. 63 pp., final blank page. With map frontispiece and several illustrations and tables in the text. Contemporary printed wrappers. Stapled.

First edition. Rare climatological study originating from a series of meteorological handbooks of the Indian Ocean issued by the British government between 1940 and 1944. The three-volume series, comprising a total of 12 parts, was prepared by the Meteorologial Office, Air Ministry, in cooperation with the Naval Meteorological Branch, Admiralty, London; it was reprinted for the U.S. Navy as late as 1980. The ESSA Technical Memorandum of 1969 mentions another reprint in 1945.

The present volume is the last of nine parts of volume II, covering the climate of the East African coast from the equator to Cape Delgado, discussing tropical cyclones and depressions, winds, visibility, clouds, rain and hail, temperature, humidity and other meteorological events. The frontispiece shows a map of the relevant area; additional diagrams illustrate surface winds and higher winds, as well as the amount of clouds and rainfall. The tables show the general climate in Mombasa, Tanga, Zanzibar, Dar es Salaam, Kilwa, and Lindi, as well as the monthly frequency of wind direction and force at sea and in the upper air, and the visibility at coastal stations.

Library shelfmark in pencil, as well as a mounted blank loaning sheet to final blank page. 7 combinations of letters and digits in black felt pen to lower cover. Traces of a shelfmark label and a cancelled inscription to front cover. Not a single copy in auction records. 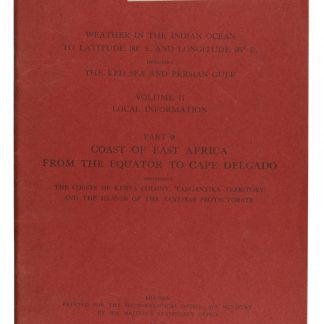