First American edition, first printing, of "Joseph, der Ernährer", translated by Helen Tracy Lowe-Porter. First published in German in 1943 by Bermann-Fischer, then exiled to Stockholm, the work formed the final part of Mann's great four-part novel "Joseph and His Brothers", written over the course of 16 years.

Signed in ink by Thomas Mann to the front flyleaf. Slight glue discolouration along the gutter of flyleaves, half-title, and title-page, as well as printer's note. Pencil markings to a few pages and a brief annotation in pencil and blue ballpoint to verso of flyleaf, otherwise a very clean copy. 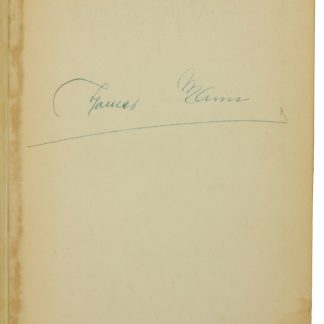