(Heath, Robert). A Machavillian Plot, or, A Caution for England. Presented in a Time when Princes Were so Pious, and Iudges Durst bee Valiant to Declare Against Unhonest Slaverie.

First printed edition, repurposing for the context of the beginning Civil War what is here given as a letter to Charles I (dated November 1629), signed by Heath as Attorney General, which warns of "rumours against your Majestie" and that an unknown person has written "a false seditious and pestilent discourse" concerning the King's revenue and the balance of power between government and monarch. The entire text is based on the early Stuart-era "Propositions to Bridle the Impertinency of Parliament", a project initially presented to King James in 1614 "to help aggrandize royal power through prerogative taxation and military despotism modelled on Italian lines" (Millstone, p. 320). As early as in 1629, the "Propositions" had been strategically recirculated through scribal networks "by Sir Robert Cotton and his friends as though it were part of the Duke of Buckingham's plot against the English state. In the 1630s, the 'Propositions' was embedded in Attorney General Heath's indictment of the Cotton circle and circulated again. Heath's bill, containing a text of the 'Propositions', was printed in the spring of 1642 under the title 'A Machavillian Plot'. The title was ambiguous: was the 'Machavillian Plot' the Propositions' scheme to extend the king's power, of the plan by ill-affected persons to raise fears and jealousies among the people, as Heath's bill charged?" (ibid., p. 320f.). In 1646, the text would see yet a further iteration, rather fantastically re-issued as "Straffords Plot Discovered". 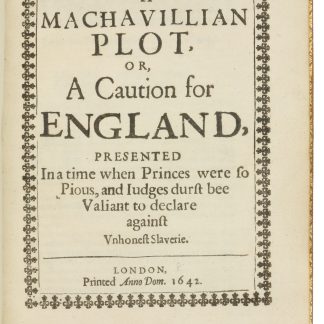