The earliest bibliography and description of Ibrahim Müteferrika's printing press

The earliest bibliography and description of Ibrahim Müteferrika's printing press, published in the fourth part of Gjörwell's periodical "Swenska Biblioteket", pre-dating by more than a quarter of a century Giambattista Toderini's catalogue provided in his "Letteratura Turchesca" (Venice, 1787).

The Swedish diplomat Edvard Carleson (1704-67) was posted on a mission to the Porte and arrived in Constantinople in March 1734, where he remained as chargé d'affaires until 1745. After his return to Stockholm, Carleson made the acquaintance of the publisher C. C. Gjörwell, who published his account and bibliography of the Müteferrika printing press. The text, dated 30 July 1735, begins with a full-page introduction describing how the press was established. Carleson then enumerates, in chronological order, 14 publications produced by the press. In most cases the content and the process of translating and publishing are described in great detail. Page numbers are given for some of the books, and prices are stated throughout.

This descriptive bibliography is a crucial document regarding the history of Müteferrika's press and Turkish incunabula. Not only did Carleson personally own the books he described, but he also mentions the future plans for the press, disclosed in direct conversation with its manager.

Gjörwell's publication includes four additional texts by Carleson: "On the Exodus of the Israelites" (with engraved map), "Travels from Cairo to Suez and The Red Sea", and two letters discussing commercial opportunities in the Ottoman Empire and its antiquities. The remainder of the publication is devoted to Swedish history and biography. 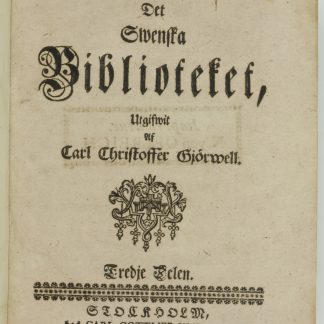