A 16th-century voyage around the Arabian Peninsula

Rare first Dutch edition of the travelogue of a 16th-century sea voyage around the Arabian Peninsula. Castro's voyage took him from Socotra up the Red Sea. He landed on both the African and the Arabian coast before reaching Suez; his account includes descriptions of the various ports he encountered en route as well as observations on the naming of the Red Sea.

Dom João de Castro (1500-48) was a naval officer and later Viceroy of Portuguese India. In 1538 he embarked on his first voyage to India, arriving at Goa and immediately proceeding to the defense of Diu. Castro was responsible for the overthrow of Mahmud, King of Gujarat, whose interests threatened Portuguese control of the Goan coast. Castro died in Goa in 1548 and was initially buried there, but his remains were later exhumed and transferred to Portugal.

Traces of glue near the gutter of the title-page, but a good copy in a modern binding. Only three copies traceable in auction records. 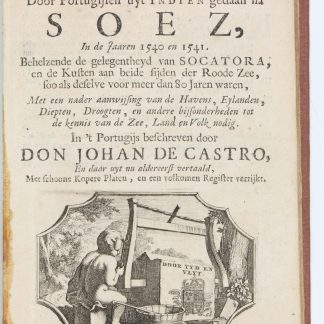