Aerial photographs of Palmyra: documents of pioneering work in archaeology

Highly interesting album, assembled by the wife of a French soldier or administrator stationed in Camp Weygand at Palmyra and in Bakka near Beirut during the French mandate of Syria and Lebanon. The woman named Madeleine annotated most photographs on the back and wrote longer messages to members of her family on some of the postcards. 19 of the photographs were taken in and around Palmyra, including large prints of aerial shots showing the Turkish Castle, the Valley of the Tombs, Palmyra with the Temple of Baal, modern Palmyra (Tadmor) and the French air base. Most of these spectacular photographs were taken by the pioneer of aerial archaeology Antoine Poidebard (1878-1955) in the late 1920s and early 1930s.

In her description of the aerial view of Palmyra with the Temple of Baal, Madeleine points out that it shows the situation of before 1926, when a Syrian village within the ancient ruins still existed. Two rare depictions of this old village, including a charming photograph of little girls gathered at a well and a photograph of a caravan before the backdrop of the Turkish Castle, are valuable documents of ordinary life in Palmyra. Other photographs show ancient monuments such as the Temple of Baal, the Hypogeum of Yarhai, and the so-called Palace of Zenobia. Many locations in Syria, including Aleppo, Baalbek, Damascus, Hama, and Homs, are represented by real photograph postcards of high quality. These include beautiful portraits of Arab men and a Bedouin man. Some private pictures of the couple and their acquaintances were taken in Bloudan near Damascus, where the first pan-Arab summit was held in 1937, and during a beach holiday in Tartus. A spectacular aerial photograph of the Krak des Chavaliers, a Crusader castle near Homs, and a valuable aerial view of Aleppo complete the Syrian part of the album.

Another portion of photographs was taken in different locations in Lebanon. Aerial photographs show the famous Forest of the Cedars of God near Bsharre, the costal street to Tripoli and a French military camp in Bakka. Beirut can be seen on four real photo postcards, a beautiful photograph of the port with the large ocean liner Mariette-Pacha, and a picture of Madeleine on a balcony of the famous St. Georges Hotel. The note on the back of this snapshot from June 1937 mentions a trip to Athens that is also documented by several photographs of the Acropolis and two postcards. Souvenirs from similar trips to Istanbul, Jerusalem, and Naples with Pompei complete the album. 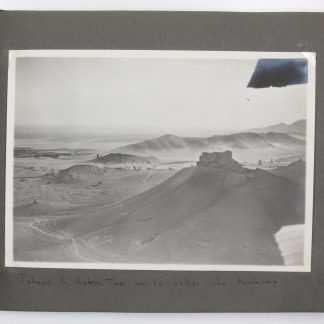