A mission to explore the Nejd

Large 8vo. XII, 780 pp. 14 maps, with a further 13 maps, plans & sketches made during the expedition, some of these double-page or folding. Contemporary blue buckram with morocco label, gilt.

First edition. The Frenchman Charles Huber, originally from Alsace, lived for many years in Syria. He was commissioned by his government to explore Nejd "in the general interests of science and doubtless the particular interests of his nationality" (Hogarth). His passage from the Shakik wells to Jubbe was made in 76 hours, some nine hours faster than Palgrave but over a day longer than the fast-travelling Guarmani. He was received by Muhammad ibn Rashid at Umm el-Dulbhan. His second journey was, this time, made with the orientalist Julius Euting, who had been encouraged to join the caravan in order to transcribe inscriptions on the many monuments seen by Huber on his first journey.

Loosely inserted into this copy is an original silver-gelatin photograph of Huber's grave at the Christian cemetery in Jeddah. 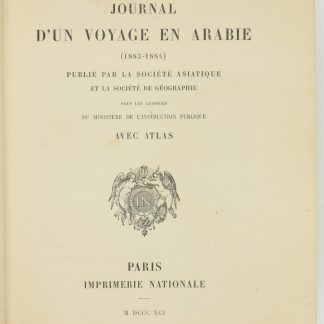