[Palestine]. - Stephan, St[ephan] H[anna] / ‘Afif, Boulos. Palestine by Road and Rail. A Concise Guide to the Important Sites in Palestine and Syria [...].

8vo. 94, (1) pp., final blank page. With a folding plan of the Church of the Holy Sepulchre and a folding map of Palestine and southern Syria. Original printed wrappers.

Very rare pocket guide to the Holy Land, prepared for British soldiers serving in Mandatory Palestine, encouraging them to explore sites of religious and historical interest in "a land of diversity" that can be "bewildering at times to the newcomers" (p. 5).

The book describes the most prominent landmarks of Jerusalem and its surroundings, including the Church of the Holy Sepulchre, the Dome of the Rock, the Via Dolorosa, the Muristan, the Zion quarter, Gethsemane, and Jericho, as well as Bethlehem and Hebron, and gives directions to and accounts of other places including Jaffa, Tel Aviv, Haifa, Beirut, Nazareth, Damascus, and Baalbek. In addition, it contains a short history of Palestine and a chronological list of events from 2,600 BC to the Lebanon's declaration of independence in 1941. 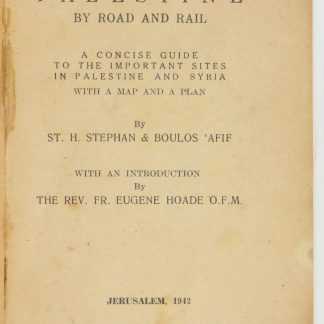