First edition of Lenin's historic appeal that advanced to the Bolsheviks' programme of struggle for unity during the party crisis. It advocates the immediate convention of the Third Party Congress as the only means to "clarify the situation, settle the disputes, and confine the struggle within proper bounds". The appeal was presented and adopted at the conference of the 22 Bolsheviks held in Switzerland in August 1904 under Lenin's leadership. A total of 19 persons actually attended, and three others subscribed to its decisions. Eventually, the Third Congress of the Russian Social Democratic Labour Party was held from 25 April to 10 May 1905 in London. 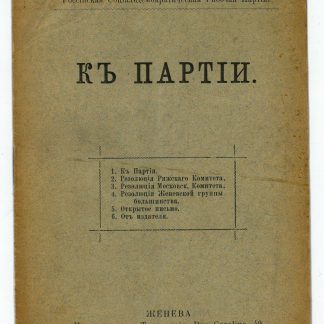